Full disclosure: the airfare and hotel for this trip and the main event on day 3 were paid for by SoFi, the student loan and financial services company, as part of a customer competition/prize and marketing effort.

After graduating from business school in 2012, I was determined to repay my student loans as quickly as possible. As some of you who have had student loans might know, the prospect of paying down a six figure debt is pretty daunting. I refinanced with SoFi, the financial services company which at the time was a small company focused only on student loans. This allowed me to drop the interest rate on my loans from above 7% down to around 4%, and through some planning, diligence and good luck, I completed my mission and paid off my loans within a few years. (huzzah!)

In late March 2018, I received an email from SoFi soliciting stories from people who had paid off their loans in full. Specifically around what they were able to do now that they were student loan-free.

I sent off a few paragraphs about how I wasn’t able to save as much, had to defer purchasing a house, and also sacrifice big trips to make those payments. I laughed at myself for even thinking they would pick me. To my surprise, I received an email just a week later informing me that I’d been selected to attend and that SoFi would be paying for me to fly to New York, stay in a posh hotel in Brooklyn, and bring a guest to the party! (more huzzah’ing).

Now to be clear, this is my first time writing a post where most of the trip has been paid for – but just to be clear – they paid for my hotel stay at the William Vale Hotel and a $500 American Airlines gift card. Nothing more. They also did not ask me to write a review or endorse their product. If you do click on the SoFi link above, it does take you to referral link – but there is no other relationship between me and SoFi.

It had been about six months since I was last in New York. I’d spent a few days back in November 2017 at my company’s office in the Empire State Building and I decided to arrive a couple days before the event since my manager is based in our New York office.

Let me first state that I am extremely fortunate to work at LinkedIn. In addition to our mission to help people learn, grow, and find jobs (basically create economic opportunities), we are fortunate to have an amazing food program. Not just great food produced by brilliant chefs, but also clever interior designers who love food puns:

I spent the day taking calls and meetings from my colleague’s desk and after work we proceeded to the Rooftop Bar at Tavern29 – a super charming bar at 29th St. and Park. If you work anywhere around midtown or K-Town (Korea Town), I would highly recommend stopping in here for a cocktail and snacks. It was really convenient for a large group too.

From here, I headed to Minnie’s on Clinton for dinner with my colleagues Guillermo and Rafa. I didn’t know much about this place but in retrospect, their one sentence description on Google is quite apt: 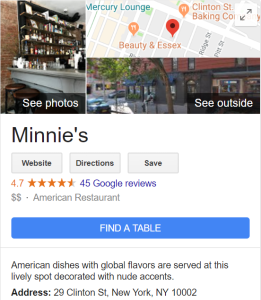 “Nude accents. What do you mean, Aaron?”

So glad you asked that question. 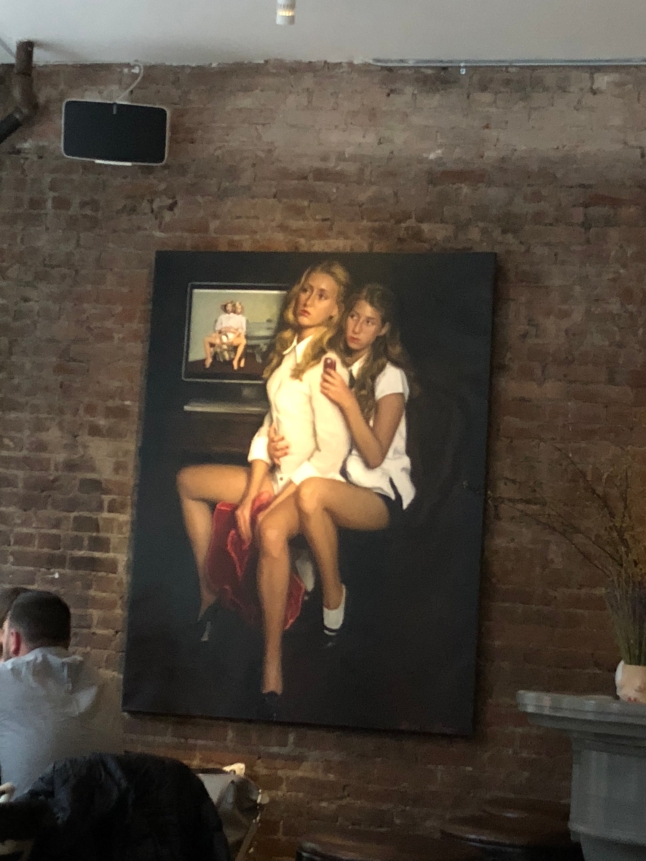 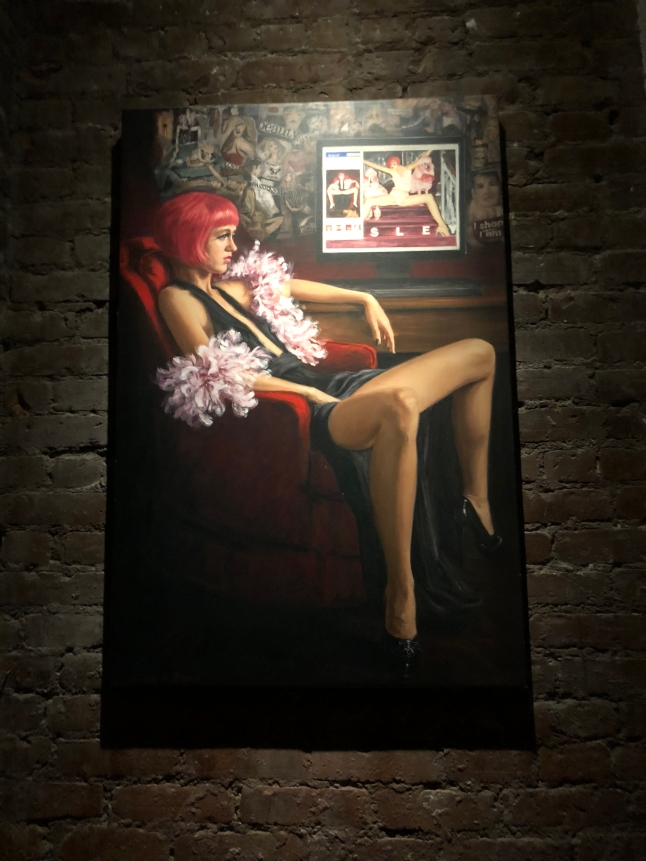 One might come in here and have a delicious meal and never even notice the art on the walls. Especially if, like me, you’re facing the street and have your back to the far wall. But then a moment comes when you turn around and ba-blam! – you get an eye-full of this. I found this art actually deeply impressive (if a bit confusing) and it added to the funky but delicious atmosphere here. But let’s focus a bit – I would be remiss if I did not call out that the food here was top notch. 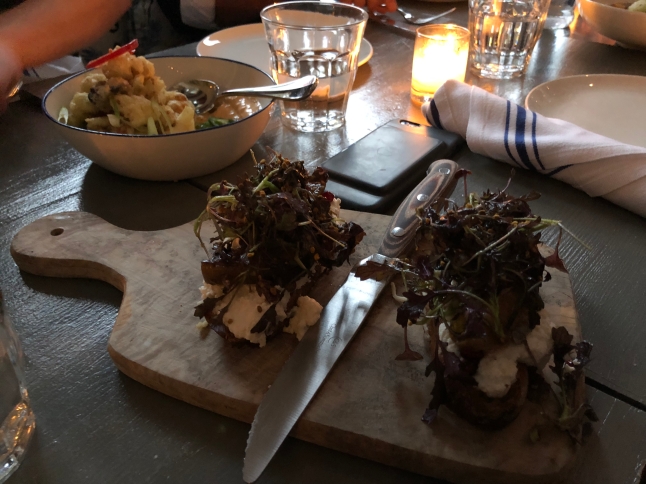 The smoked cauliflower fritto, lamb neck flatbread, the sheep and the peach (sheep ricotta with arugula, peach bee pollen, and pistachio on sourdough) were just some of the amazing dishes we tried. Highly recommended if you’re staying in the Lower East Side.

My second day in New York was meetings and virtual conference calls like most any other day. But it’s worth giving a shout out to the amazing staff who run the LinkedIn food program in New York. 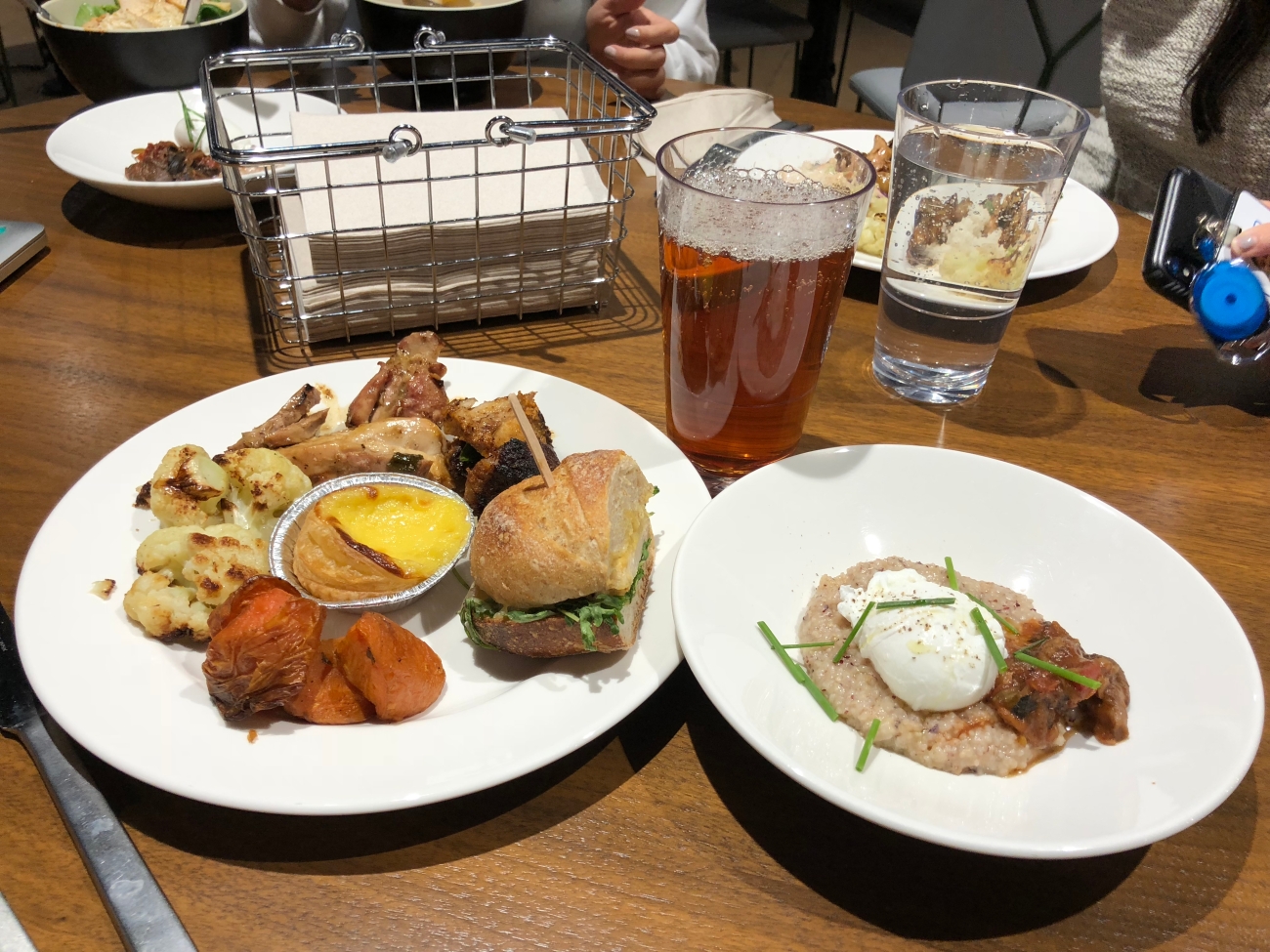 There’s so much variety and pride in their craft, which spans a variety of cuisines and is delivered impeccably.

My nighttime was also a lavish affair. Thanks to a friend, I was able to see an advance screening of Avengers: Infinity War several days before its premiere to the public – and to say it took my breath away would be an understatement. It’s been a couple months since the movie was released so you’ve likely seen it, but if you have not, please GO SEE IT!

After the movie, I picked up my gear from my friend’s house and took a ride into Brooklyn to check into the William Vale Hotel, where SoFi was putting me up. 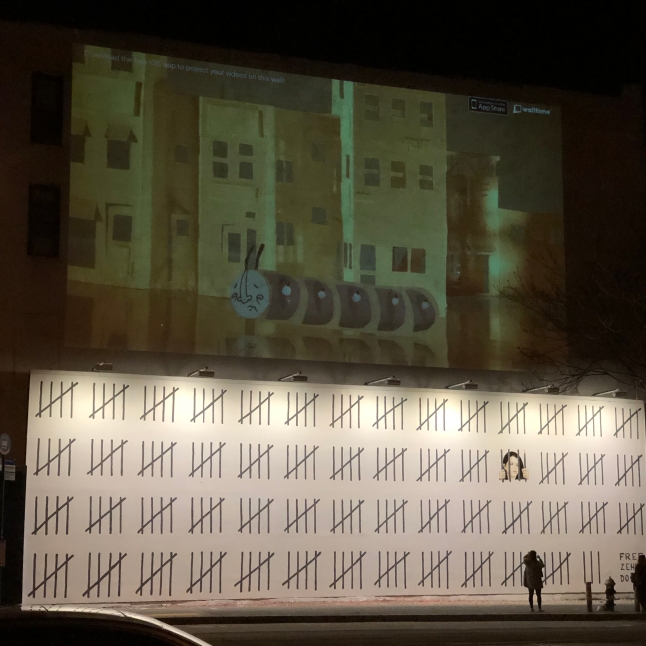 And street art too

And street art too

Now it’s worth stating that I’d never heard of this hotel before staying here. When I asked my colleagues and friends, they just told me it was posh. And that was clearly an understatement. When your floor signage has backlighting, you know it’s fancy. And don’t worry that there aren’t any view photos. Those are coming tomorrow morning. 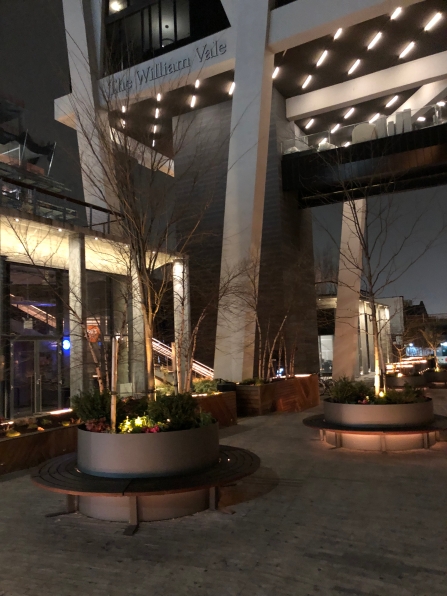 The front of the hotel

The lobby, past the check in desk 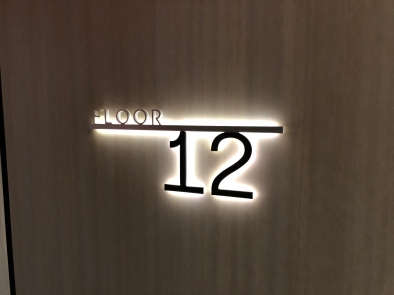 When your floor signage has backlighting, you know it’s fancy 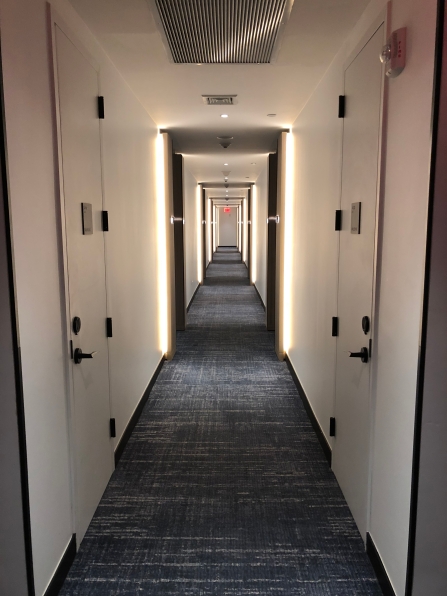 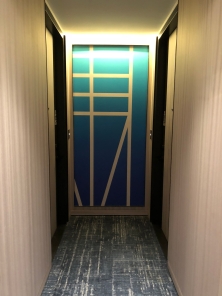 My kind of lux bathroom

Okay so it’s the next morning. And a stunningly clear one. And the views in every direction make you realize why they can charge so much for this hotel.

The morning view from the William Vale 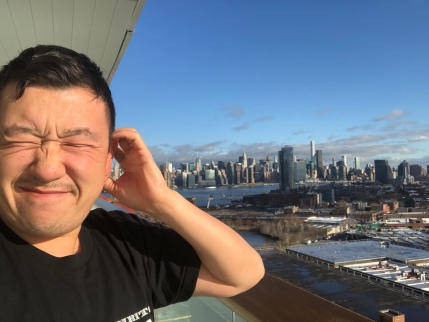 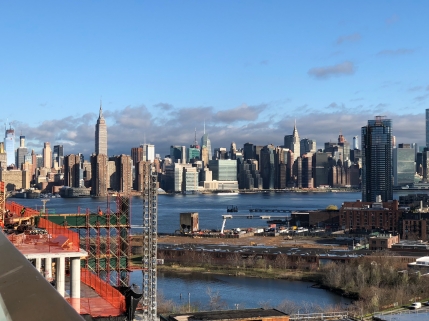 I decided to take a longer walk through Brooklyn before taking the subway to work on my last full day. As you can tell, there’s a lot of brick in this borough. 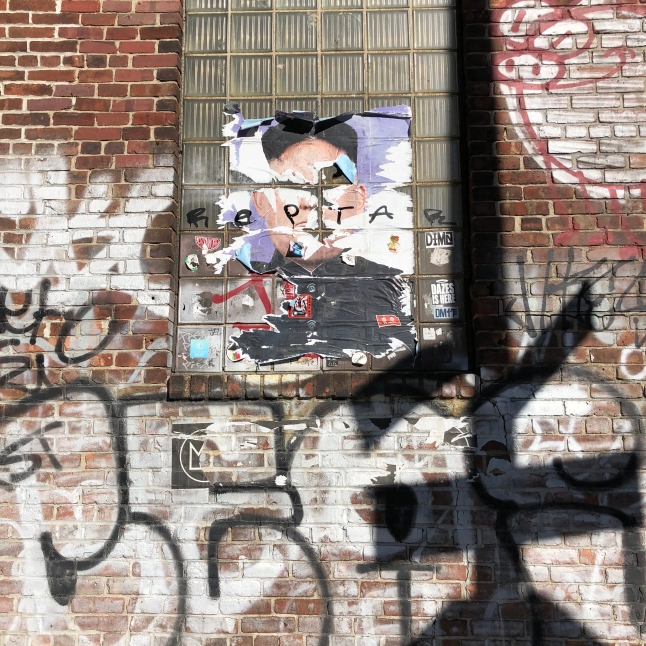 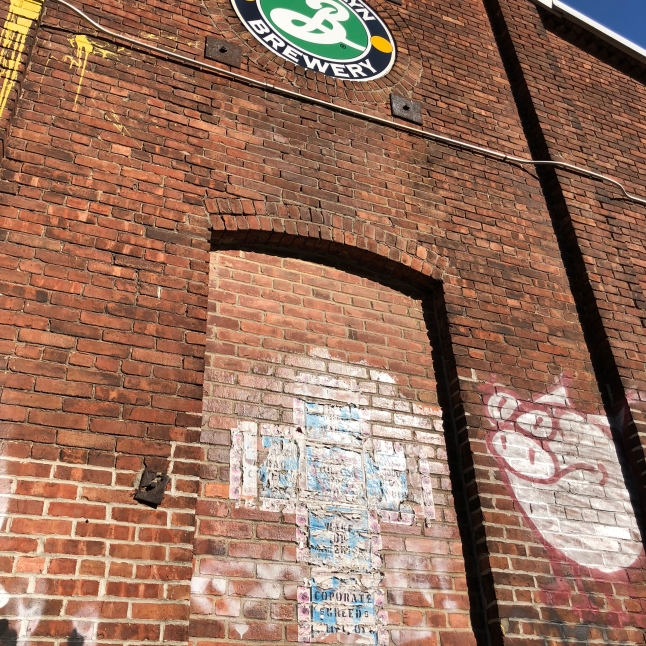 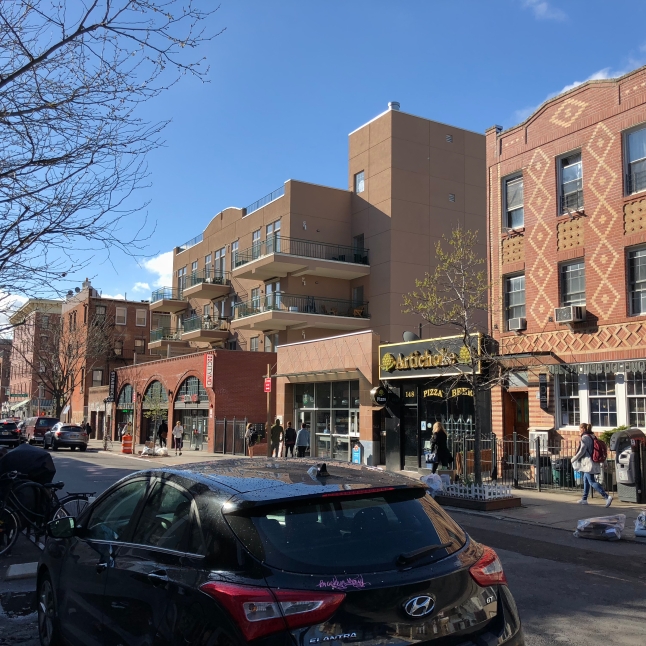 You really cannot sufficiently describe the views from the Empire State Building and from my office specifically. 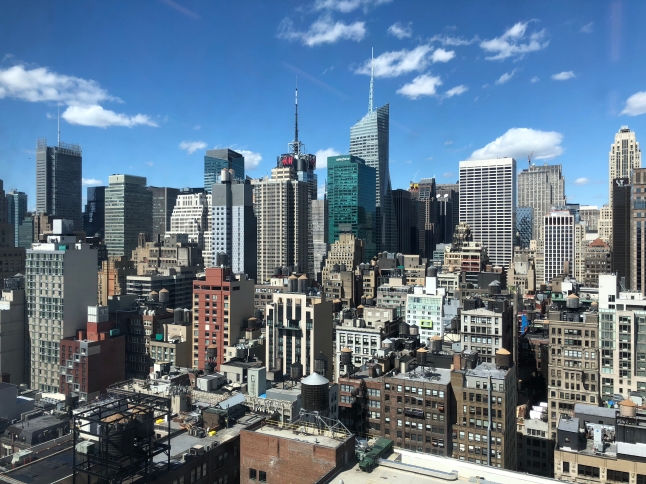 Some work stuff happened here, but do you really want to learn about that? If so, hit me up on LinkedIn and we can talk talent shop as much as you want! 🙂

At the end of the work day, I bolted back across the river to attend the SoFi Debt Free After Dark event. I quickly changed and then spent 20 minutes with the SoFi marketing team doing a series of interviews about my experience before I had to meet my guest.

My wife couldn’t take time off work on short notice so I invited my cousin Roxanne who lives in Astoria, NY to be my guest. She and I knew this event would be swanky since it was hosted at Westlight, the bar on the rooftop of the William Vale. But we were still blown away by the combination of views, the well-made cocktails and fancy finger foods.

Me and my cousin Roxanne

Look at that view 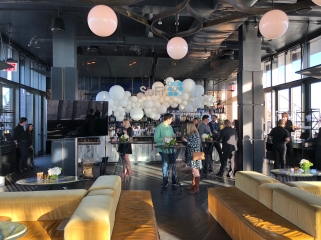 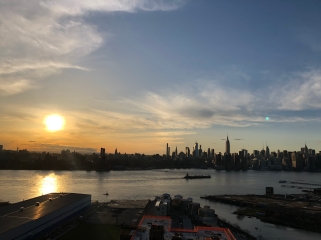 Our guest speaker from National Geographic

Kudos to the planning team who also did a hell of a job with their marketing and signage:

It’s funny though. The night took on a different energy as soon as the sun set. 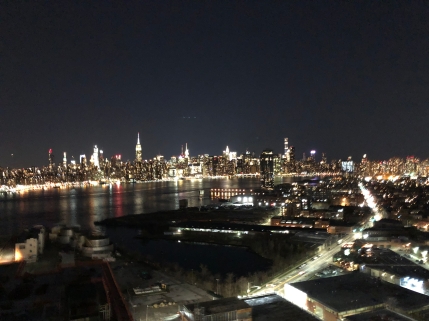 Hmm. Okay, maybe it was the drinks. But hey – I still have to say it was a hell of a good time.

Maybe that’s why it was so much fun later

Kudos to the SoFi team on the personal touches

Kudos to the SoFi team on the personal touches

So much of a good time that I may or may not have wandered out into the street after the event to pick up a late night snack. 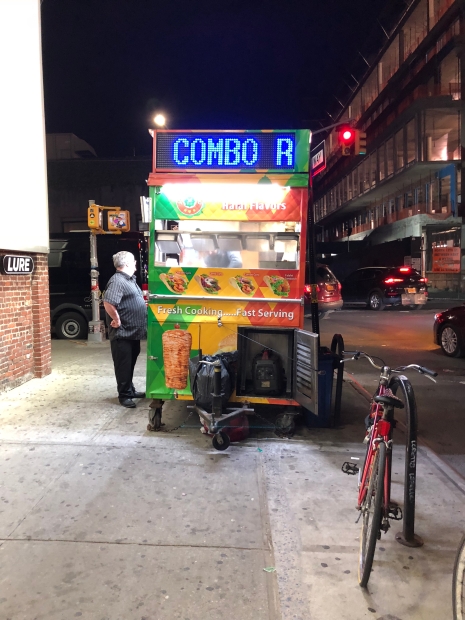 I cannot say no

For those of you who do not know what this is, this is the ubiquitous cart you’ll find on many New York street corners. Serving a variety of items, they usually give me a chicken and rice combo with the white sauce (a creamy, non-spicy accompaniment) that has sustained many a night of heavy drinking. I had to fly out the next morning on an early flight so this was probably was not the best idea, but when life hands you lemons, the best you can do is make a delicious lemonade.

New York is and always has been my favorite place to visit in the world. But I have to tip my hat to the team at SoFi for hosting such a great event. All of the planning and communication was top notch and I appreciated the effort they went to. This trip also made me realize how cool Brooklyn is and how I need to spend more time there on subsequent trips.

One of the things I talked about in my interview (I’ll post it here if they use my comments) and in conversations with the SoFi team is that I’m only able to travel as much as I do because I got a good job out of school and I was able to pay down my student loans in a timely manner. SoFi certainly helped me with the latter and for that, I am extremely appreciative.