Mexico brings my country count to 25. It’s a rather big milestone and puts me in striking distance of the big 30! I think I’ve got a pretty good lock on the Western Hemisphere and I am excited to head off to Russia in May.

Trip Background: Last year, my friend Jeff and his fiancee Rita invited me to their wedding in Mexico and I jumped at the chance. 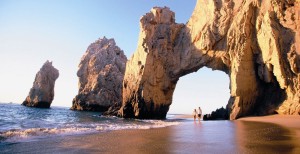 The idea of a proper beach vacation was simply irresistible. And Los Cabos provides some spectacular views, from the Arch of Cabo to crystal clear ocean waters. Although some images of Mexico revolve around the urban density of Mexico City, spring break trips to Cancun, and drug-riddled border towns, let’s instead portray an idyllic beach town with gleaming sands.

That does sound better.

But even the best laid plans of mice and men often go awry. Last September, Hurriane Odile left a path of destruction that marooned travelers, displaced locals, and threatened to deprive the entire region of tourism and business. The natural disaster ruined the Westin Resort and Spa Los Cabos, where Jeff and Rita had planned their original wedding, but thankfully the Sheraton Hacienda del Mar was able to fill in.

I think we’ll survive. As with Ireland, Caitlin is coming with me for the weekend but there’s a big difference. Our last itinerary was go-go-go from city to city. By contrast, this trip’s plan is as follows:

Day 5: Some combination of the above

We’re excited to get away from work and the city, and not have an agenda. That being said, fear not. We will likely explore the area and consider some outdoors adventures, which I will be more than thrilled to report back to you all. As usual, if you’ve got any suggestions, please leave them in the comments below!