Our home stretch of the trip took us from Galway out to Ashford Castle, which was purchased by one of the Guinness descendants and is now one of the most expensive hotels in the world. We knew it would be closed for renovation until March but wanted to see the estate regardless.

After a quick walk around the castle, which even in full canopy and scaffolding is a sight to behold, we drove onward to Connemara National Park. 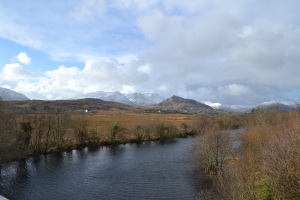 Blistering winds and cold made photo taking tricky, but the natural landscapes beckoned to be captured and shared with the world. Connemara is a district of Ireland west of Galway and the lush green of the hillsides and the snow-capped mountain tops make the place one of the most spectacular views I’ve ever seen. We drove for a couple hours, stopping to take pictures at random spots and to refill our gas tank, when the most unexpected sight arrived in the form of Kylemore Abbey, an estate built by Mitchell Henry as a gift to his wife, Margaret. The massive castle popped into view and Caitlin and I decided to pull in and see if it was worth the view – and oh it indeed is worth it. 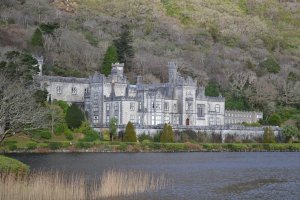 It’s €13 to get in (€9 for students) and this gets you in to see the ground level of the home, the Gothic Church about a half kilometer away, and a walled garden that would have been the envy of those coming to visit from Dublin or London in centuries past. If you know you’re going, buy your tickets online to save 10%. The home is regal and stately despite massive damage suffered in a 1959 fire and the building was used as a boarding school up until a few years ago. Thankfully the support of the Benedictine Church has kept the estate in fantastic shape, despite the pressure of the natural elements.

From here, we looped around the Connemara peninsula and drove back to Galway, where we wandered around the Galway Cathedral and the National University of Ireland, Galway, in search of dinner. We found a pub, Brasserie on the Corner, where we sat down in search of some of Galway’s famed seafood. Desperate for warmth, we started with Irish coffees and then put our faith into a mixed seafood board and a stuffed chicken – and we were not disappointed. Afterwards, we drove back to our Airbnb and went to bed.

Nothing says vacation like spending 2.5 hours in a car to start your day. Note the sarcasm there.

Our last full day in Ireland saw us return to Dublin from Galway. This was the easiest part of the trip from a driving perspective as it was one main highway with a high speed limit and (relatively) wide lanes. We returned our car to Avis and took a cab back to our hotel, and in doing so we learned another lesson: cabs charge a fee for an extra passenger (€1) and when you call them to come pick you up (€2). The latter didn’t make much sense, but I suppose this is why Uber and its peers are disrupting the taxi industry.

At this point, Caitlin and I took a break from one another – she to a haircut, and I in search of my guilty pleasure: eating Chinese food in foreign countries. It’s one thing to eat Chinese food in China or Taiwan, but it’s an odd thing in Argentina or Ireland. Yelp yielded a limited number of options but I found a relatively well regarded place a few blocks south of the hotel and sat down at the Good World Chinese Restaurant. I was pleasantly surprised to find people speaking Cantonese and Mandarin, and I used my baseline dish to compare their food to what I am used to: beef chow fun. 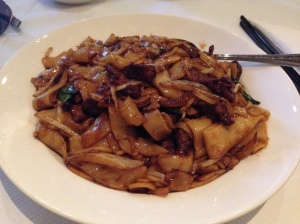 Now for those of you who aren’t Chinese food aficionados, this is basically a mainstay of Chinese American cooking, but it’s not exactly common. “Chow fun” refers to the wide, flat noodle whereas chow mein refers to the standard skinny noodle you’d find in a lot of places. In a lot of places, chow fun is not readily accessible because it’s cheaper and easier to use the skinny noodle. In this case, the dish was greasy, full of beef, and utterly delicious. It would have been better if I had been hungover, but I was not one to gripe.

Our next stop was at Murphy’s, an ice cream shop on Wicklow Street – a place we’d been told about by a friend. You’d be hardpressed to go wrong with any flavors, but I really liked the Irish Coffee (with whiskey), Dingle Sea Salt, and Real Rum Raisin. The Guinness wasn’t as sweet as I would have liked, so perhaps skip that one. From here, we set off for the Guinness Storehouse, but wound up surprising ourselves on the way.

We happened to walk by the Jam Art Factory, a small gallery with a couple locations that highlights some cool local artists. I’m a big fan of the movie Up, so this print caught my eye:

They also had some witty art from a local artist/comedian.

Our last major activity of the trip is one that really shouldn’t be missed: the Guinness Storehouse. Before you go, buy your tickets online. This not only saves you 10%, but allows you to cut the line. Bring a print out if you can and that’s it! Super easy. Once you’re inside, it’s clear you’re in a commercialized, some might even say bastardized version of what Arthur Guinness originally created, but honestly, this is a fun way to learn about the history of Guinness, learn the proper way to pour yourself a pint, and the best part: having your drink in the Gravity Bar atop the storehouse, with sweeping views of Dublin.

For our last evening, Caitlin and I took dinner at a place called The Woollen Mills. This place gives off some major Lower East Side vibes from its white tiles and long wooden tables to its lower lighting and delicious take on Irish food. Given we were headed home, I opted for the first thing that made me go “Wow!” and it was the following:

Aaaaand from here it was a quick walk home and passing out for the night.

Our flight took off at 11 AM so we descended upon the buffet in the Westin lobby before departing, and set off for Dublin Airport via the #747 bus. It’s a really easy 20 minute bus ride back to the airport, and sitting on the second level of the bus provides a nice calm view of the city’s varied neighborhoods before you get on the motorway.

Once at the airport, we had to proceed through security, in which I had “Fast Track” status which functioned like a TSA Pre Check. Once through, you can buy items in duty free or head through to the US Preclearance check – which essentially forces you to repeat the screening. Then if you’ve got Global Entry, you can speed through passport control before heading to the gates that are all bound for the US. If you plan to buy any liquor, plan to do so here. This includes the delightfully peaty Connemara whiskey and the aforementioned Dingle Gin. Highly recommended!

The treasure trove of booty
(from left to right)
Midleton Single Pot Still Sampler Set, Dingle Gin, Connemara Whiskey, and Jameson Distillery Reserve (you can only get this at the distillery)