Kenmare and Dingle, Ireland (“Whiskey and the Seaside”)

But the reality was there was more drinking and that beautiful salty seaside air that comes with Ireland’s west coast.

If you’re looking for castles, Ireland is the place to go. Much like palaces in Russia or medinas in Morocco, the castle was the home, the stronghold, and the fort all wrapped into one for many a lord, landowner and wealthy clergyman.

The Rock of Cashel is the main attraction in Cashel and despite being battered by the elements, it is truly a sight to behold. Consisting of a round tower, chapel, and cathedral, most of the structure was undergoing repairs to ward off the attack of rain, wind and other natural erosion. I wouldn’t go out of my way to come to Cashel just for this, but if you happen to be here, it’s well worth the visit.

As we departed from Cashel, we debated where to go. We had planned to visit Cobh (pronounced “Cove”) where there is a Titanic museum, but part of our conversation with the lovely Irish couple the previous night led us to consider the Jameson Distillery in Midleton. Now this is different than the one in Dublin, for this is where all of the Jameson in the world is made. You pay €15 (€12 for students) for the tour, which departs several times per day, and you’re given a history of the Jameson Company and their distilling process. If you know when you’ll be there, book online for a small discount. Our tour was slightly tainted by a loud group of Portuguese tourists who decided to add their soundtrack of mocking comments to our tour, but in spite of this, it was still a great experience. At the end, you get a free cocktail (Jameson neat, on the rocks, or mixed with ginger ale) and a rather weird tasting selection of Jameson, Jack Daniel’s, and Johnnie Walker Black Label. The intention of this is to compare Jameson to whiskies from other parts of the world but we thought that this was not a particularly fair comparison.

“Let us compare the finest automobiles in the world and compare Toyota, Ford, and Aston Martin to one another.” Doesn’t sound right, does it? And as our fellow tour participant from Lausanne, Switzerland, astutely stated, “If I wanted to taste scotch or American whiskey, I wouldn’t have come to the Jameson Distillery.”

After our tour, we drove to Cork where we were staying at the Hayfield Manor. Now prior to this trip, I had no idea which hotels were fancy and which were not in the town. All we knew was that Cork is a college town, with University College Cork bringing students from all over the world to the town. When we told the woman in Cashel and another woman from Cork whom we met on the tour that we were staying at Hayfield Manor, one gasped and the other cooed “Woooow” with admiration and respect. When we arrived, we drove in through a stately gate and past a pair of trees that you might expect to find on the grounds of Downton Abbey or Versailles. We walked into the lobby and were immediately greeted with a smile, a chair pulled out, and a complimentary glass of Irish whiskey.

The rest of our evening consisted of dinner at the Liberty Grill, an upscale restaurant in downtown Cork, and then pub hopping with two people we had met on the Jameson tour (that woman from Cork and her friend who coincidentally was visiting from San Francisco). We settled into a corner booth at a bar called Charlie’s and proceeded to enjoy beers from Franciscan Well (a Cork based brewery that actually partners with Jameson on one ale) while listening to live music most of the night.

The morning started with your typical Irish winter weather: gray skies, slightly drizzly, and a bit chilly. But as soon as we made our way to the English Market, everything warmed up – literally and figuratively. The English Market bears resemblance to your normal farmer’s market, but with a huge variety of meat, seafood, and pastries. Oh and there’s a restaurant upstairs where you can get a coffee and a breakfast sandwich to enjoy along with your morning paper. 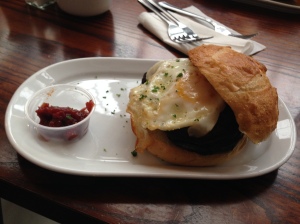 From there, we set off from Cork a bit behind schedule on the way to Killarney. As we sped along the road, a sign caught my attention:

Toy soldiers? Hell to the yeah! My girlfriend was not as enthused but agreed to detour us off the main highway by 4 km so I could see this place. I imagined that a group of super nerdy folks came together and built a small operation with those green figurines that we’ve all seen before (one sniper, a regular infantryman, a grenadier, and maybe a heavy weapons specialist if you were lucky. 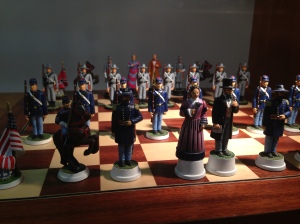 And this is the kind of place where you and your three 30-year-old male friends could reenact scenes from any of the original Lord of the Rings trilogy battle scenes. Do you want to have Merry and Pippin meeting the Ents and calling them “trees”? Do you want the scene where the dragon goes berserk at Helm’s Deep, picking dudes out of the fortress and devouring them whole? (note this scene may have some factual inaccuracies…it has indeed been several years since I watched any of the LOTR series all the way through). This place was also humming with people working here and they had a surprisingly large commercial operation running. If you find yourself here, do yourself a favor and pay for the half hour painting experience. We didn’t have time but this would be a really fun activity.

We continued onward and wound up deviating to Kenmare, which is on the Ring of Kerry. We didn’t have the full four hours to ride the full thing but if you have the flexibility, please do so. This is where we learned a critical lesson which bears repeating:

In Ireland, it is better pick a few spots and spend more time in each rather than try and rush through the country.

Understanding where to go is important, but quality over quantity will make the trip better. Our journey took us through Killarney and landed us in Dingle, a delightful seaside town which bears many similarities to Charleston, South Carolina. The comparison lies in the relaxing smell of the Atlantic Ocean, the laidback attitudes of people who live there, and the delicious seafood. I mean sure…there are cute, winding roads and colored houses too, but the point here is that you can easily spend a few days relaxing in Dingle. As an example of how charming the town is, take our lodgings for the night: the Dingle Benners Hotel. When we checked in, we were told that we had been upgraded and our room had a four poster bed. How awesome is that?

I’d also add that the woman working the front desk at the Dingle Benners Hotel was perhaps the single most helpful person we met during our travels. Her name was Aisling and upon discovering we were from out of town, she asked if she could make a few recommendations and proceeded to give us our dining, drinking, and entertainment schedule for the evening. For a romantic dinner, Half Door is two blocks down (everything is really within a few blocks) and try whatever the catch of the day is. The soda bread will start you off, and from there it gets better. I had a vegetable medley covered in cheese and baked, a finely grilled hake with a seafood cream sauce, and bread pudding – and by the end of the evening I was stuffed. We then took in drinks at Mack Dick’s, an oddly named but laidback locals’ kind of bar. 200+ varieties of whiskey await you and I’d recommend Connemara (a peaty Irish whiskey that will bear resemblance to scotches but surpass your expectations). We ended the night at the Mighty Session, a bar with live music, and the Dingle Benners Hotel bar where we made sure to sample a few more whiskies (Greenore and Green Spot are two others worth trying). 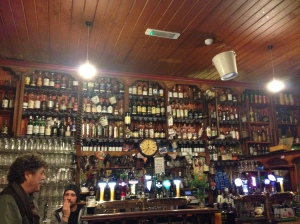 The 200+ whiskies available at Mack Dick’s in Dingle, Ireland 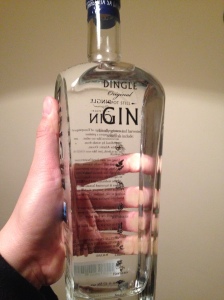 This gin could stand on its own, and it does. Caitlin is a former bartender and she and I both like a good gin, but we agreed that this was the best gin we’d ever had. The complex flavors come out when you sip it neat, and when you add soda and a lime, it is refreshing, cool, and completely satisfying. Note: You can buy the bottle here in Dingle, but they sell it at the airport! And for much cheaper, I might add. It was €23 at Dublin Airport vs. €32 in the supermarket in Dingle… just wait to pick it up until after you’ve gone through the US Customs Preclearance in Terminal 2. You can also sample other whiskies there – see my forthcoming post on Days 7-9 for more details on this!

Day 6: Dingle, The Conor Pass, and a Near Death Experience

Aisling told us a story when we checked in. The exact details were a bit off but it went something like this:

“Ah what is it with you Americans and getting up early? We have people come here from America and get up at 5 AM to go for a run. They ask us where the paper is and we tell them it won’t be here for three hours! No, we won’t have coffee ready at 5 AM. Go back to bed!”

Given our desire to blend in, we took Aisling’s advice and slept in until 11 AM. When we finally did get going, we took the map that the barman Tomic had given us the previous night. On it, he’d suggested instead of driving to Limerick that we instead drive the Conor Pass, a scenic, mountainous drive which often narrows to one lane that provided some of the best views of the trip. 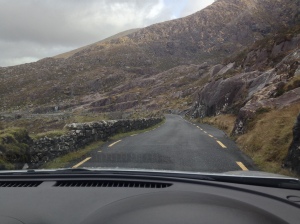 A typical lane on the Conor Pass

From Dingle, we drove to Tarbert, where we caught the Shannon Ferry (€18 for a car) across to Killimer, and then proceeded to the Cliffs of Moher. We eagerly had expected this to be the highlight of our trip and instead found it to be the most terrifying. The weather had turned super gray by this point (it was close to 4 PM) and the wind was howling. I don’t mean it was blustery – it was near tornado strength. When we got to the cliffs, we couldn’t even exit the car without the door flying open and it was scary. I googled the weather and we were in the midst of 60 mile per hour winds. 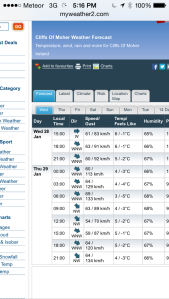 Dejected, we stayed in the car and watched as other cars pulled up, assessed the alarming weather situation, and retreated. We then drove to Galway on what I can only describe as the most alert I have ever been in a car. Roads that consisted of anywhere from 1-2 lanes (for two directions of traffic) at speeds up to and including 100 kilometers per hour meant that I had to be laser focused on the road – and there were several close calls. After two hours, we finally got to Galway and after what I was call “the unhealthiest meal of our trip,” we checked into our Airbnb space (an apartment shared by a lovely Polish couple) and went to bed.