This trip took place in February 2016, but unfortunately I had to delay writing this due to a death in the family in spring 2016.

In 2015, I found out one of my dearest friends from grad school was getting married and to my delight, she and her fiancé decided to tie the knot in Roatan. Now if you’ve never scuba dived before or you’ve only had minimal travel to Central America, the odds are you’ve never heard of Roatan before. I soon discovered it is not only one of the best scuba diving spots in the entire world, but a beach community that prides itself on a culture of relaxation and natural beauty. What followed was a delightful excursion to the nation of Honduras, one filled with many touristy moments and happy celebrations.

Getting to Honduras from San Francisco was a surprisingly difficult journey. It felt like I spent less time in transit to get to Tokyo on a previous trip than I did to get to Roatan, but the truth is it’s not that far in terms of distance. The challenge is where you connect through to make this journey happen. This trip took Caitlin (my then-fiancée, now wife) and I through San Salvador on a five and a half hour Avianca flight, operated by Taca), and the decision to take red-eye was motivated more by the fact that I used United miles and managed to get us bumped up to first class. We arrived in the El Salvadorean capital groggy, sleep deprived, and facing a 30-minute layover – which I didn’t think was allowed in terms of transfer time. Because of this tiny window, we literally sprinted through the San Salvador airport to reach the flight and they closed the door right behind the couple behind us (who coincidentally was there for the same wedding and with whom we are now good friends!). A quick hour and a half later, we arrived at Juan Manuel Galvez Internaional Airport (RTB) and took our prearranged cab to Roatan.

Upon arriving at the Bananarama Resort, we checked in and there was this lovely sign outside the main office: 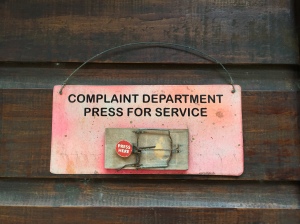 After seeing this, I knew we were in the right place! There are a fair number of options in terms of places to stay, but Bananarama was the recommendation of the wedding party and it was close to the venue. As a result, this wedding trip turned into a beach vacation filled with the kinds of suntanning, sandy cocktails, and sunsets that one would imagine from a slide of Central American paradise.

The sunsets to which authors dedicate entire books and universes 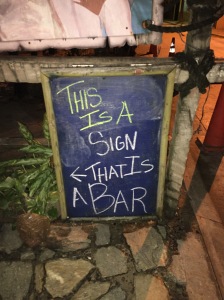 Good to see the owners of Sundowners Beach Bar have a sense of humor!

One thing to note – you can bring U.S. dollars to spend on food, drink, transportation, etc. If you do this, make sure to bring plenty of smaller bills. You can’t go wrong with breaking a $100 or $50 bill and getting enough $1’s and $5’s.

Our second day began with breakfast provided by the hotel. I would compare the experience to waking up in your friend’s apartment and he’s your typical bachelor:  breakfast is going to be a little half assed and your 12-year-old brother would cook just as well, but you never have to worry about not having alcohol or coffee to wash it down. With our stomachs full, we turned our attention to the soft sand and warm water, filled our beach bag and headed for the nearest beach chairs.

The beach by the Bananarama

The water in Roatan is clearer than any other place I’ve ever been to in the world. If you strap on your googles and stick your head into the water, you’ll see far and wide and your field of vision will track all of the fish and other sea life scurrying about the rocks and sand.

After a couple hours of reading, sleeping, and attempting to turn my pale skin into slightly less pale skin, we walked up the road to Celeste’s, a local restaurant, for baleadas. You could compare this to a quesadilla in that you take a flour tortilla and cram it full of meat, cheese, salsa, black beans, and sour cream. So basically it is a quesadilla…and I’m not sure why I would say you could compare a baleada to a quesadilla. They’re the same thing.

Waddling back to the resort, we decided to explore the island. The problem is the infrastructure is in pretty poor condition and traversing the roads is not only more time consuming and expensive – it’s a quite a bit more dangerous. So we took a water taxi around the island, stepping off at West End. This small area is where you’ll find a number of small curio shops, cafes, restaurants, and bars. The wife and I spent an hour walking through the streets, then onto the local beaches far out of sight of the main tourist drag, and knowing that we still had an hour before we would link back up with our friends, we landed in a small café bearing a sassy name.

We would spend an hour at Sandy Buns reading, sipping iced coffee in the heat, and watching the locals and tourists alike pass us by on their way to the beaches, to work, or somewhere in between. We took the boat back to West Bay and that night went to the wedding rehearsal dinner where we were treated to delicious steaks, lots of alcohol, and many memories of the soon-to-be married couple.

We also returned back to Bananarama to find a new houseguest had moved into the bungalow next door. Thankfully he was super chill and it turns out we both have a lot in common – we both like chilling out by the beach and have a similar taste in music! 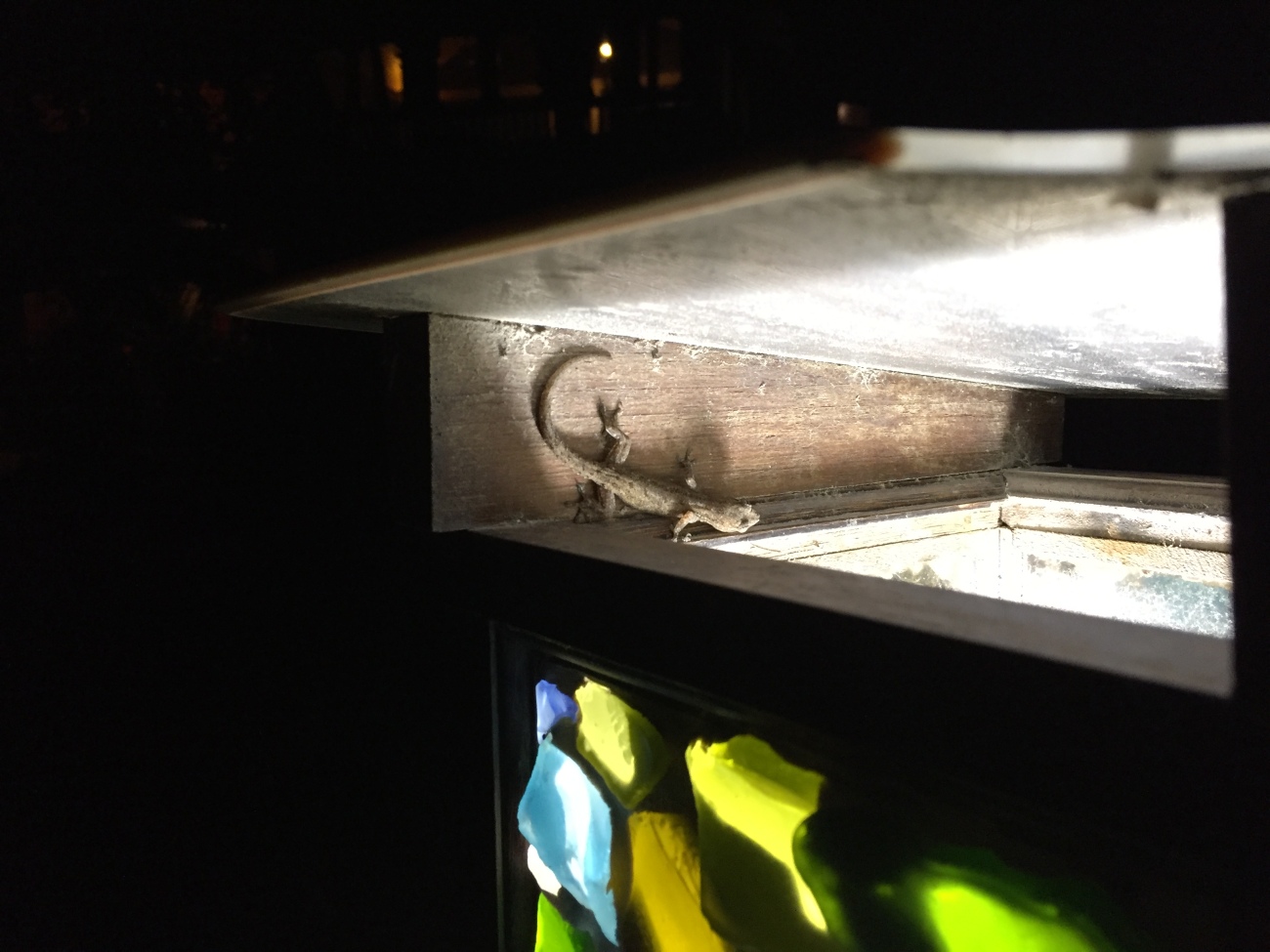 No, he did not attempt to sell me GEICO insurance.

Day 3: Beach Time and the Wedding

Ah the big day was finally here. Our morning began as most days do. With a gorgeous dolphin sculpture carved meticulously into the sand.

What, you don’t see things like this all the time? I’m so sorry. For you.

For lunch, my friends and I decided to be terrible tourists and went to the nearby Hangover Hut, a small shack run by Canadians which clearly targets western (aka American and Canadian) tourists with its poutine and hamburgers.

I’ll only post one photo of the wedding given it wasn’t my wedding, but the one shot should tell you all you need to know about weddings in Roatan.

It started raining just as the speeches were given and as soon as the “Do you…” questions started rolling, the clouds parted, the blazing sunshine rained down upon the beach, and all of a sudden – the drizzle stopped!

The rest of the night was a blurry mashup of karaoke music, dancing, dinner, and fireworks. And though I can’t (nay, won’t) post the pics from the party, take my word for it – it was a blast!

Day 4: Sticking my Head in the Water

Waking up late the next day was a great way to work off the excess booze and dance moves. Although Roatan is a scuba diver’s paradise, I didn’t have time to get certified and Caitlin and I didn’t feel like renting any gear. So we took our goggles, my waterproof bag, and went swimming. This video is a short sample of what we saw in the water:

Our afternoon plan was super ambitious. We decided we would suntan, followed by have a cocktail, and then if we had time, we would do both of those a couple more times. Thankfully, we managed to do everything we set out to do. 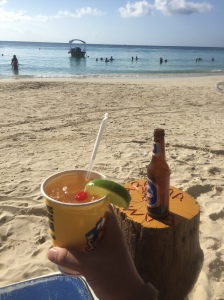 Our agenda for the day

The afternoon took another delightful turn when towards the end of the day, a bearded man approached us on the beach and asked if we wanted donuts. Dave, my new friend from California who had been running behind us to catch our connection on that first day, told us about how this guy was famous. Every day he walks the beach selling his donuts and every day there are gringos like me consuming them. 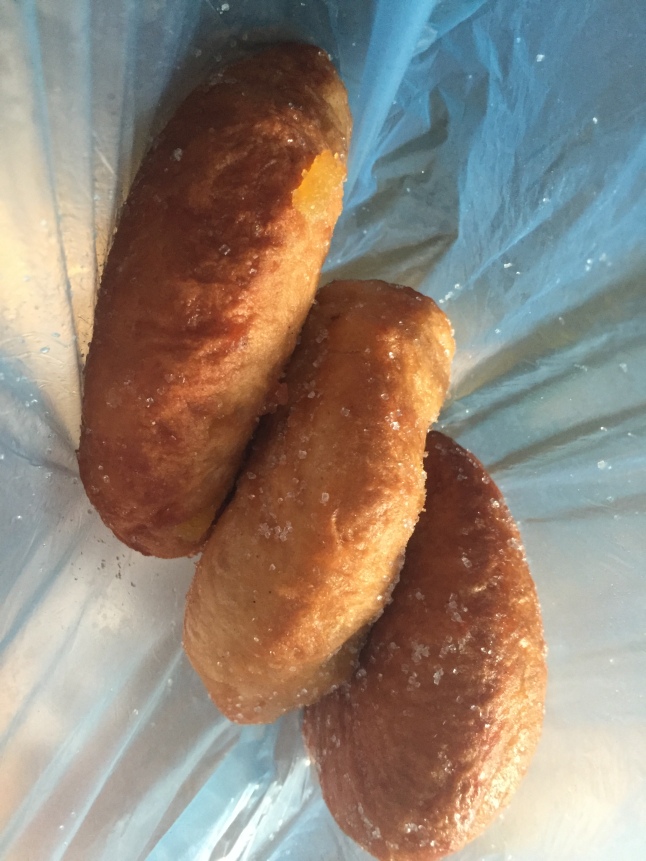 For USD $5, he pulled three donuts out and tossed them into a plastic bag and we had our delicious mid-afternoon snack (and even breakfast the next day). The donut vendor also proudly exclaimed that he was a local celebrity and that we could buy a t-shirt with his likeness in the nearby gift shop. I chuckled at the unlikely possibility but later that afternoon, we found it!

You better believe I bought it on sight. Although in retrospect it was not the best purchase. That t-shirt itches and is definitely not comfortable. But at least it provided a fantastic story to tell.

For our last night in Roatan, we took the water taxi back to West End in an attempt to go Creole’s Rotisserie Chicken, which was touted by the bride and groom as a delicious dinner spot. Unforuntately, we arrived to find Creole’s was closed for the day.

But never fear, for in paradise there is always another vendor ready to sell you a meal. We kept walking, found a restaurant at the end of a gorgeous pier, and watched another sunset while eating fresh fish and vegetables and drinking beers. Not a bad way to live.

Okay so it’s not lost. But our time in Roatan had come to an end. 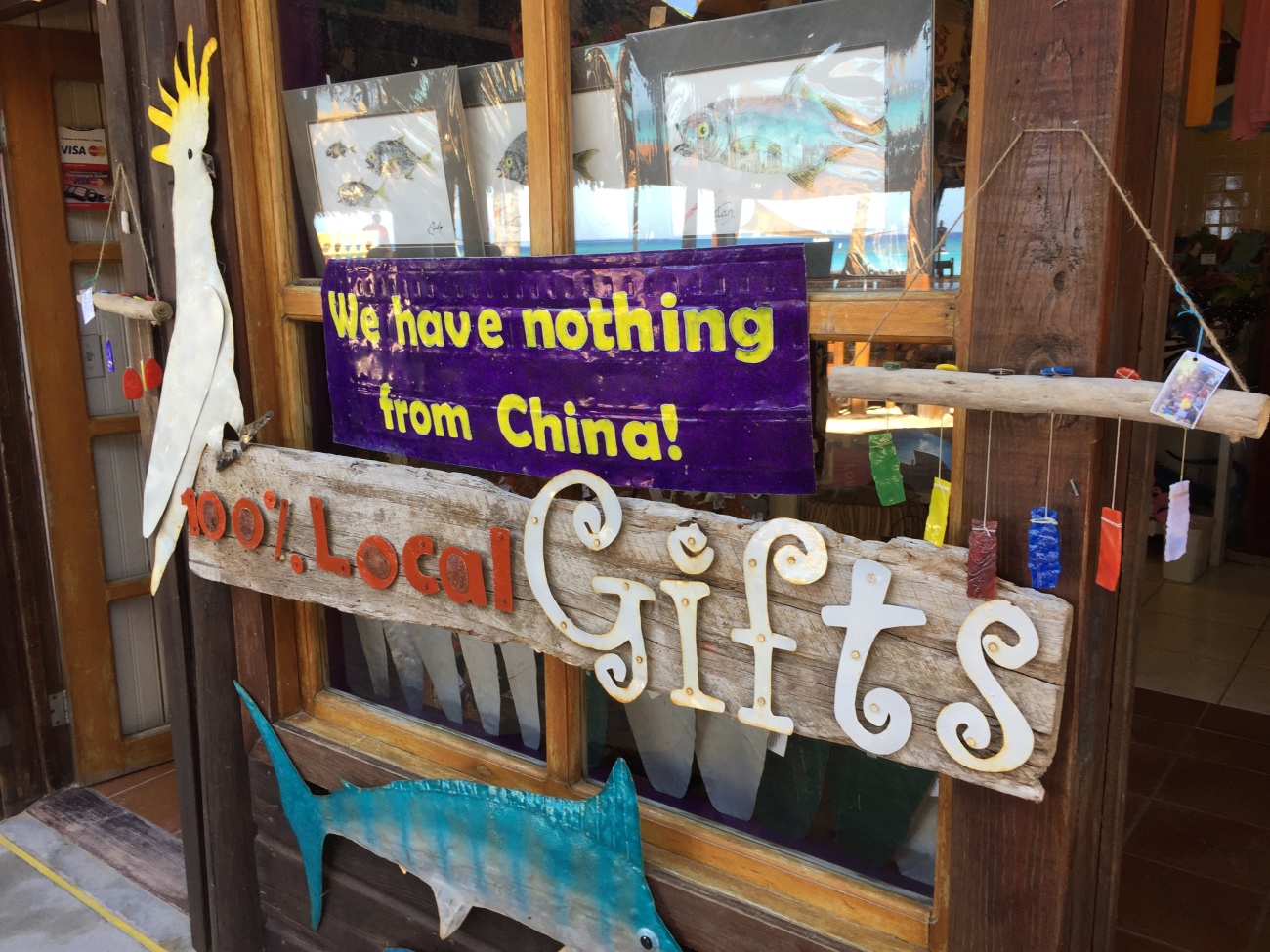 We made the customary pass through the gift shops, making sure to buy some Honduran coffee and cigars before we left (note: don’t buy the cigars…they were bitter and tasted awful), and took the shuttle to the airport. Before we knew it, we were back home in California, but still dreaming of those blue Honduran skies and that clear ocean water.

Because our time in Roatan was more consumed by wedding activities and activities with people in the wedding, we didn’t have as much of an opportunity to explore more of the island. Roatan is beautiful but there is far more to Honduras than just this island tourist destination. That said, coming here was a lovely escape from the urban world and if you love soft sandy beaches and gorgeous water, this is definitely a place to visit. Just watch out for the pricing on flights, as our tickets were running almost $900 each (thank god for points and miles). Keep an eye out for promotions, for example this recent special on TheFlightDeal.com had fares for under $300 from NYC!