So first of all, I apologize for not writing this sooner. I took this trip around way back in September 2015 and Indonesia gets me up to 27 countries – my first new country in seven months! I changed jobs in August and it’s been a hectic fall but that’s no excuse…sorry!

Trip Background: This falls into my bucket of internet flight bargains. I decided to take a short holiday over the Labor Day weekend and luckily found a fantastic fare to get me from SFO to Jakarta for a grand total of $742 (airfare only). This might have started as a mileage run but it turned into a surprisingly fantastic trip.

The flight from Dallas to Tokyo was on an old 777-200. I’ve flown this model a bunch (especially on the Japan-US or Japan-Canada legs) and it still surprises me to see a business class with a middle seat in the center. The inflight service began with American’s amusing attempt at a “Western meal” consisting of teriyaki glazed mushrooms, spinach and frisee with strawberries and blue cheese, and horseradish panko encrusted chicken. The food wasn’t bad but it reminded me of a young twenty-something guy trying to impress his date with home cooking and the result looking like the result of poor culinary training. Thank goodness the sundae is hard to mess up as it made up for that funky encrusted panko. The snack of udon noodles though was a tasty treat and the beef donburi served before landing was also decent. 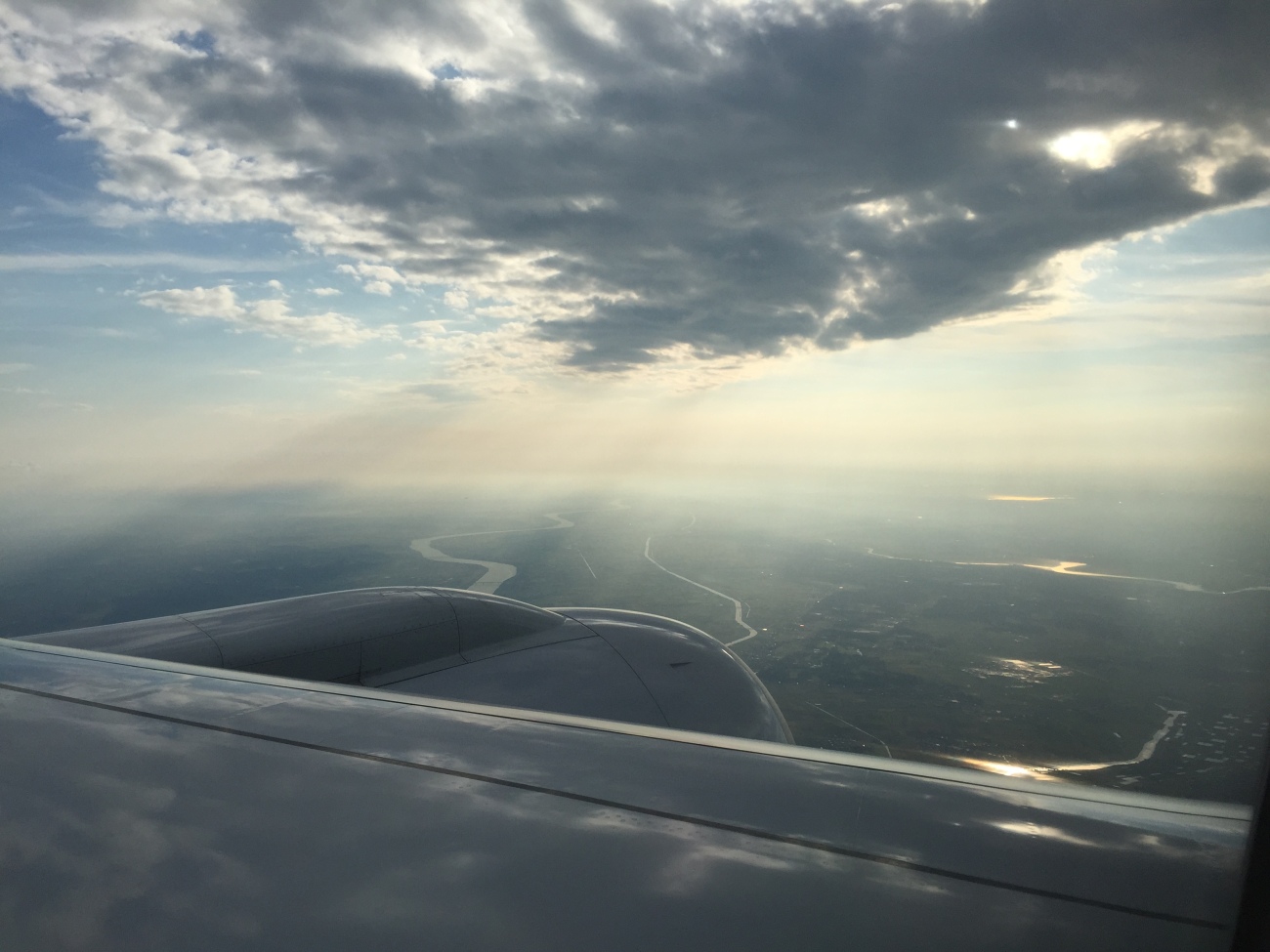 Amusingly the first class on this plane reminded me of my business class experience on other flights.

You might be shocked to learn this but flying from San Francisco to Dallas and then Dallas to Tokyo takes a really long time. And it doesn’t mean it’s a quick hop to Jakarta either. The good news is any layover in Tokyo means a stop at the Sakura Lounge, which is probably tied for my favorite airport lounge in the world (with Dallas’ Centurion Lounge). This is the place to rest for a bit, take in a good meal, and enjoy the peace of watching planes taxi from gate to runway or vice versa. If you come here, you MUST eat the Japanese beef curry over rice. Probably one of my favorite dishes anywhere.

The flight from Tokyo to Jakarta took another eight hours and I made the mistake of not trying to get an upgrade so I had a tiny coach seat. Insert sadface here. When I arrived at Jakarta, my hotel was a quick ride from the airport and they conveniently sent a shuttle to bring me to the Sheraton. You can read below for more information on the hotel but as a small tease, this is the best category 2 SPG property I’ve ever stayed at – and it would rival some of the category 4 hotels I’ve stayed at.

My only real day to explore began with breakfast – and the hotel had a fantastic spread. Fried rice, Chinese congee (jook), toast with Nutella, donuts, and plenty more. I have to admit there was an odd experience to start the day. When I withdrew money from the ATM, it showed a monstrous balance. Sadly that’s because the dollar gets 750,000 Indonesian rupiahs, so just keep that in mind as you do your currency conversions.

I then took an Uber from the hotel to downtown – and this was a surprisingly easy experience. If you go to Indonesia and take Uber, don’t expect your driver to speak English or your car to have air conditioning but it will be a super cheap ride.

My first stop was the Grand Indonesia Shopping Center, where I decided to indulge in some consumerism. If you close your eyes at any Westfield shopping mall in the states and then open them here, you probably would believe you were in the same place. Among my surprises: finding an outpost of Bonchon Chicken, getting some boba tea, and finding an amusingly named Chinese restaurant. I also found an eponymous restaurant – that was definitely a fantastic moment. 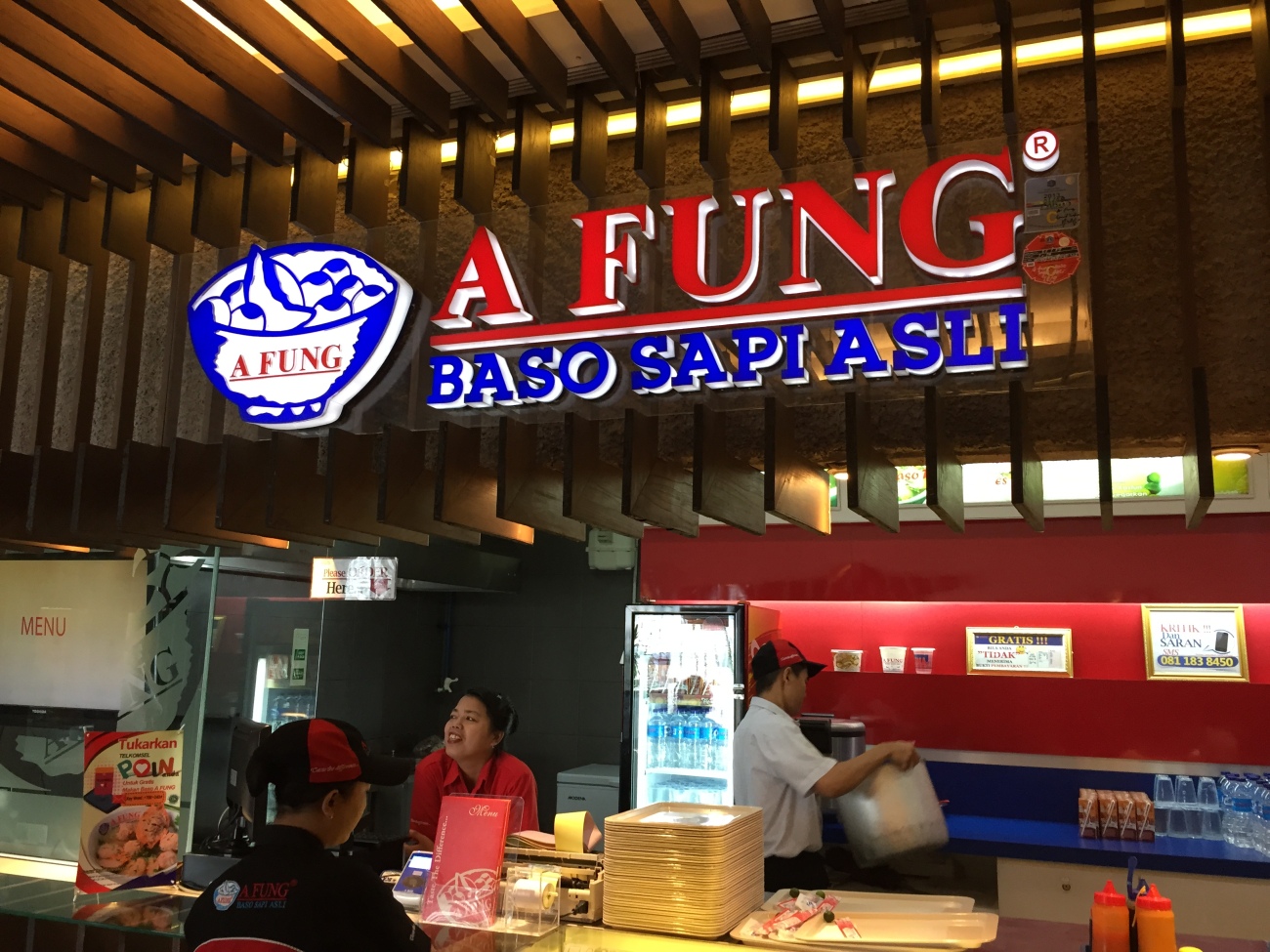 Perhaps I have unknowingly inherited a chain of restaurants!

From there I walked to the National Museum where I explored the cultural and anthropologic history of Indonesia. The National Monument was nearby and makes you feel like you’re seeing a modified Washington Memorial. From there I tried entering the Istiqlal Mosque but found myself a bit lost – and the building was actually closed. I then proceeded to have an Uber adventure where the aforementioned lack of English makes it really hard to re-direct someone. My driver got lost and stuck in traffic in two different places so I decided to abandon my efforts to get a meal. I then ended the night with a dinner in the hotel and a massage before hitting the hay.

For my last day in Indonesia, I decided to chill out by the pool with a cocktail and a book. Sometimes all you need is a little time out. I took the hotel shuttle to the airport and learned that if you just ask nicely, you get a seat upgrade! I got bumped up to economy plus on Japan Airlines because of my OneWorld Emerald status. 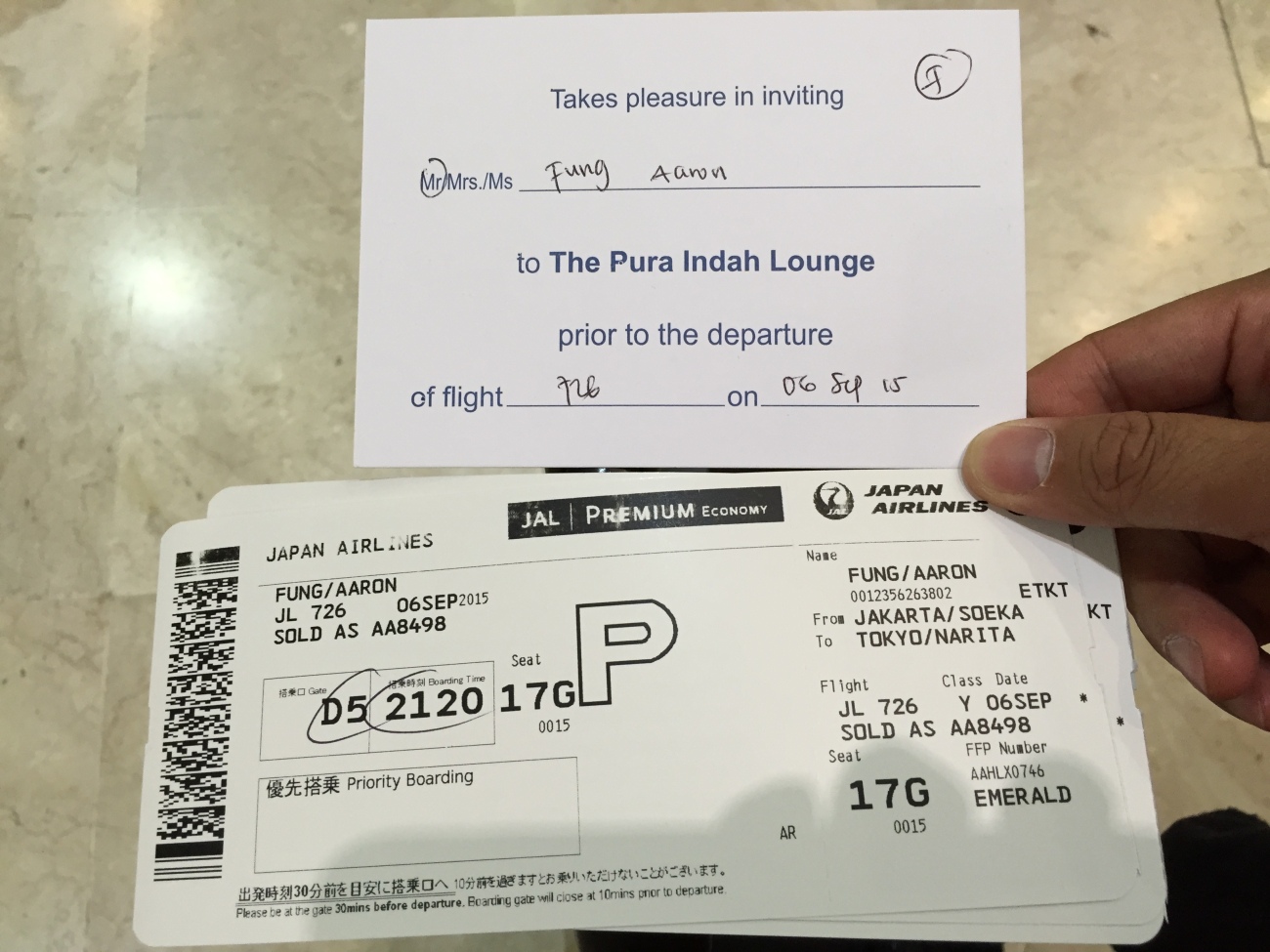 Movin’ on up! Just by asking nicely…

The benefits of going back through Tokyo meant a second pass through the Sakura Lounge aaaand – yes, you guessed it – more Japanese beef curry. The lounge also provided a free massage before I took some time to buy some prized Japanese whiskey. Here was the top shelf stuff I couldn’t afford/couldn’t even buy:

The leg from Tokyo to Dallas was again on an older American plane but I decided to try the Japanese style meal this time and it was impressive! 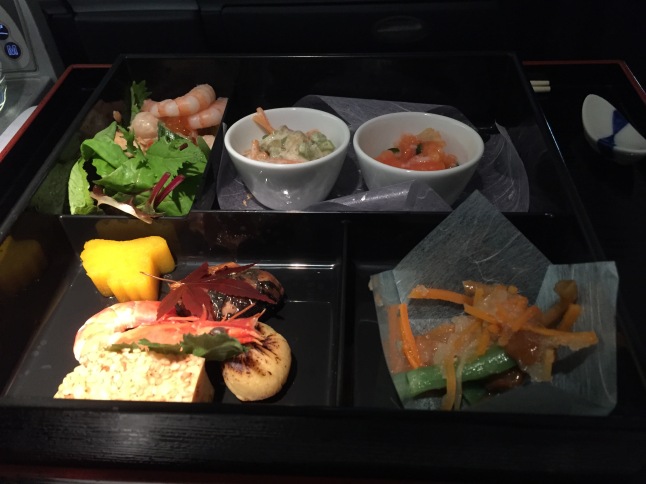 Staying: The Sheraton Bandara was extremely convenient to the airport and a real shocker for a SPG category 2 property. Although it is a fairly long ride from downtown Jakarta, there’s a nice pool available for guests and the dining room provided delicious breakfast. If you’re lucky enough to get upgraded to a suite, you will be very comfortable but don’t forget you’re in Indonesia – the open air plan will expose you to a lot of smog, especially on late summer days. Make sure you avail yourself of the spa – I got a 90 minute in-room massage for $45 including tip. 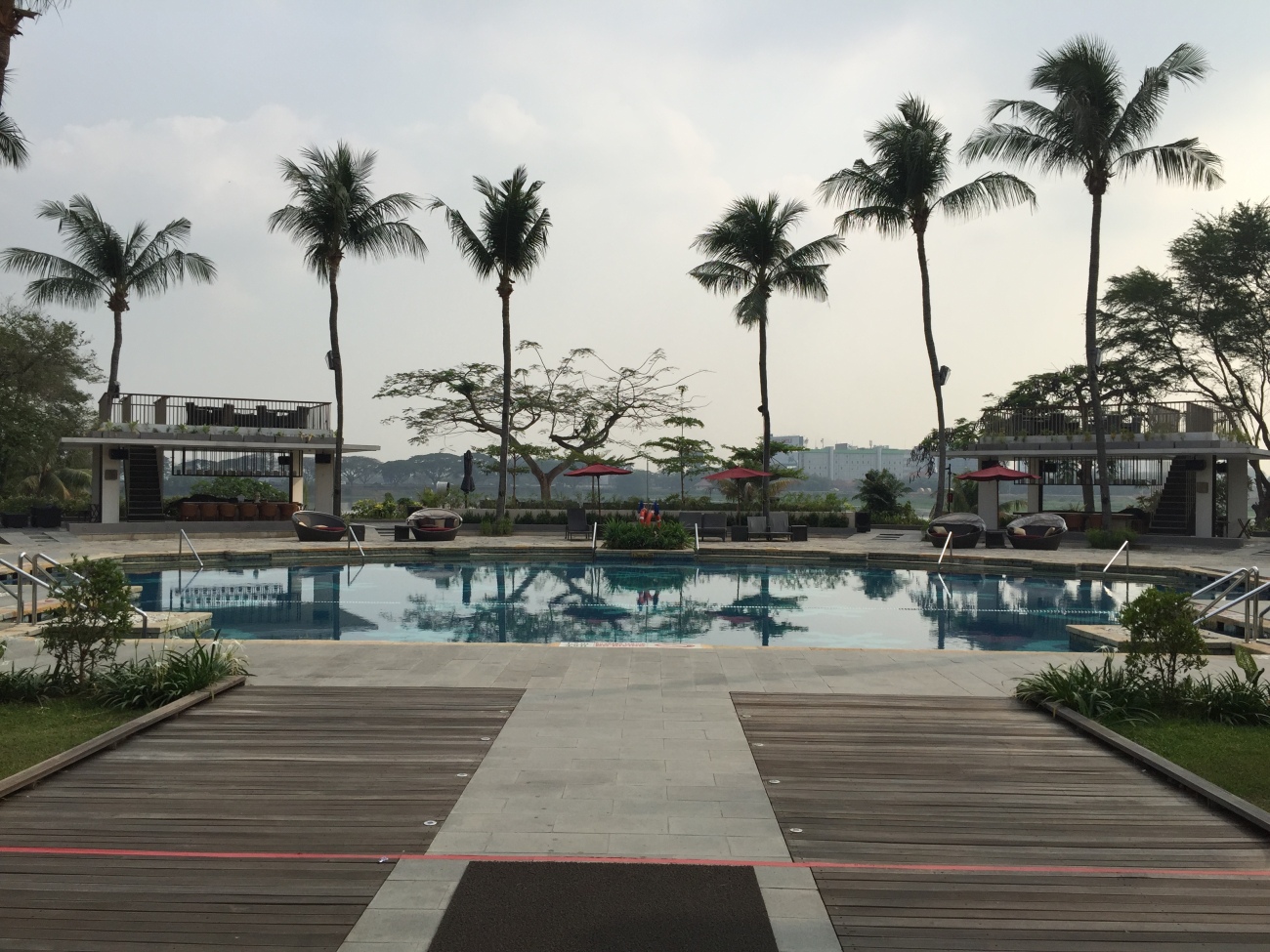 Dining: Not having too many opportunities to eat outside the hotel makes this section a bit hard, but I will say Indonesian food is delicious and can be both rich and deeply satisfying. Curries and rendangs (meat dishes cooked in coconut milk and spices) are two staples you’ll find that will satisfy and refill you for long days of exploring and sightseeing. 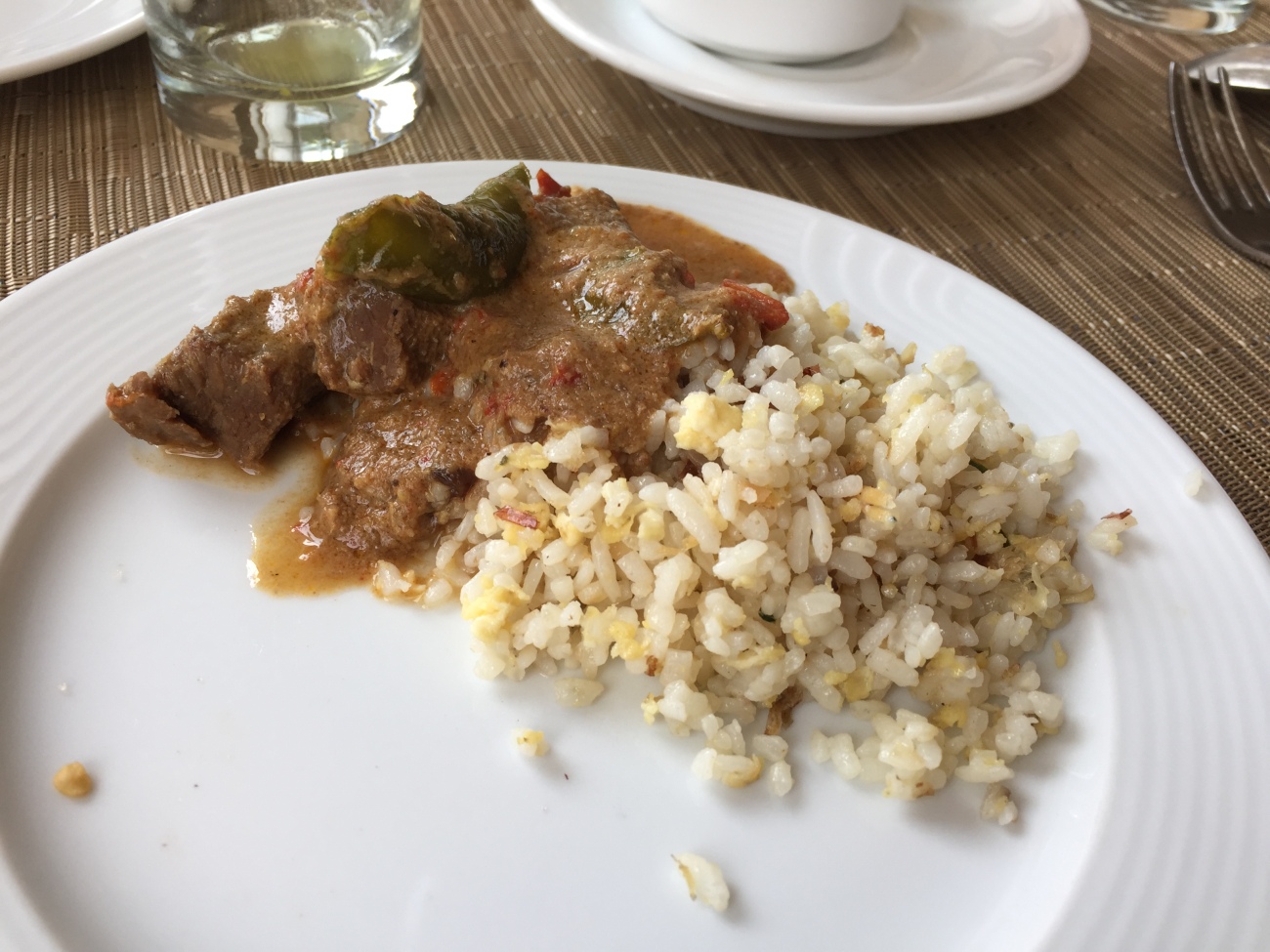 Overall: Indonesia is an affordable place to visit, but think carefully about what you want to see. Most people I know go to Indonesia to relax in Bali but going to Jakarta is what you would expect from a large Asian capital: dirty, busy, and full of energy and life. If that appeals to you, the low cost of transportation, food and activities will make it a very attractive place to visit!