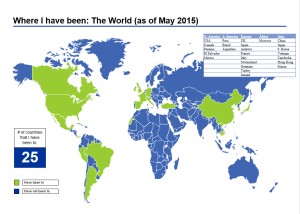 Sadly I am still stuck on 25, since Canada isn’t a new country for me. No new countries since February? Outrageous! But my return to Vancouver for the first time in nearly nine months definitely inspired this post and I’ve got plenty of pics to go along with it.

With its gleaming glass buildings, the sparking English Bay and Vancouver Harbour surrounding it, and the North Shore mountains proudly protecting the city, Vancouver is a clean, pristine city of diversity and delicious culture. I spent five months working in Vancouver and another seven months working in British Columbia on a project, and if there is an ideal, pristine city that I would live in (outside of my hometown of San Francisco), this is it.

Vancouver has an interesting reputation with the sky high prices of real estate thanks in part to foreign investors and an Asian diversity that has earned the city the nickname “Hongcouver.” Thankfully this legacy also brings with it some of the best Asian food, notably ramen, dim sum, and sushi – which takes advantage of Vancouver’s fantastic seafood.

Staying: If you’re looking to stay close to downtown, you will not lack for hotel options – my favorite of which are the Westin Grand, the Fairmont Pacific Rim, and the Hotel Georgia. The Westin is near to my heart since I basically lived there for 40 nights in 2014. The Grand earns its name from its grand piano shape and is a narrow but elegant hotel comprised of all suites. Note that if you get a room ending in 3, 8 or 9, your room will likely have a deck or larger square footage. The 8’s have nice floor warmers in the bathroom too!

But if opulence is your style or your name ends in Gatsby, the Pacific Rim is where you want to stay. This place has the best views given its location near the water and its spa is simply to die for. For couples looking for a romantic weekend, a room at the Pacific Rim and a trip to the spa is a great way to escape.

The Georgia is part of the Rosewood family of hotels and is a stark contrast from the Grand and the Pacific Rim in that it has a historical elegance and chic feeling that I’ve rarely seen in hotels. Hawksworth is the restaurant on the main level and you’d be hard pressed to find a finer elegant meal in all of Vancouver.

An honorable mention is the Fairmont Vancouver Airport. I know what you’re thinking – “airport hotel?!?” Well, trust me when I say this is no ordinary airport hotel. Fairmont earns its reputation on great service and comfortable luxury, and if you’re going into or out of Vancouver and need a quick transfer, this hotel is situated above the terminal (literally) and provides a great escape from the hustle of YVR.

Dining: Vancouver’s nickname of “Hongcouver” is based on the large Chinese population that has emerged, but don’t assume the city only has dim sum and Chinese banquet halls to differentiate the food scene. You can definitely go to Richmond and get your fill of that, but try sampling some of the following places and you won’t go wrong:

You can drink all over Vancouver, but check out the Vancouver Urban Winery. The neighborhood of Yaletown is also a prime spot for drinks. With its cobblestone streets and elevated walkways along the restaurants, it evokes a very New York feel.

Take the diversity of San Francisco, the seafood and natural beauty of Seattle, the sophistication of New York or Hong Kong, and you get Vancouver. Except it’s way cleaner. Flights to YVR are fairly easy and if you’re coming from the west coast, you can either fly Alaska into Seattle or fly Air Canada/WestJet direct. So what are you waiting for? Get going to Vancouver!